My Love of Food....(Or better yet, my love of people eating my food) 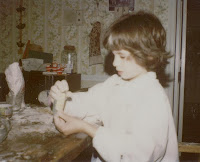 I have an addiction.....it's cooking, baking and making others eat it.  I get some crazy satisfaction out of other people enjoying the fruits of my kitchen labor.  And I have been this way since I was a child.  As a baby, I played with pots and pans.  At the age of 7, I was baking our holiday cookies.  As a teenager, I was experimenting with food, making meals for the whole family.   And in my twenties, I cooked for all my friends.

I can't say that I was always GREAT at cooking and baking, but I loved to try.  I had a few recipes that were my specialties, and I was known for being "pretty good".  Then, in 2001, my soon-to-be ex-husband decided that he wanted to open a restaurant.   At the time, we were in a position to try, so we jumped head first with no regrets.

Kelley's Grill opened, Downtown, in March of 2002.  It was a small hole in the wall, and just 15ft wide.  We only served hamburgers and hot dogs.  It was simple and cheap.  AND IT WAS AWESOME. 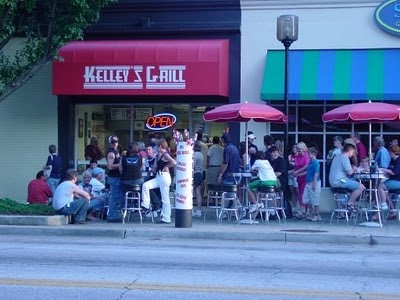 The best part (for me) of helping to run the restaurant, was coming up with new ideas and menu items.  I started baking huge Chewy Chocolate Chip Cookies in the mornings.  And when I started selling out every day, I added more desserts.  I was making Cheesecakes, Apple Pies, Eclairs, Key Lime Pie and Key Lime Cheesecake.  Hell, I even made Sugar-free Cheesecake for our diabetic customers. At one point, I had two fine dining restaurant owners asking me to either be their pastry chef, or to sell them my stuff for their menus.  I loved every minute of it.

Since I lived in Philly in the past, we HAD to add an authentic Cheeseteak to the menu.  We even had our bread shipped from Philadelphia.  We added Baked Potato Wedges and Baked Beans.  We added a full breakfast menu too.  I still miss those Country Ham Breakfast Burritos!

The Grill closed its doors in 2004, right as we were on the verge of "making it".  We had a line out the door every day for lunch.  But unforeseen circumstances led to it's closing.  However, I still dream about how much I loved being a part of owning and running that grill.

And since the close of the grill, I feel like I have come into my own with cooking and baking.  It was such a great experience.  It's like I finally know now what I'm doing, I'm enjoying it, and others benefit.  I would gladly spend my days cooking great meals, baking fresh bread and making decadent desserts.  And I will be happy to force anyone to eat it.

This is just a small fraction of the stuff I like to make.

Posted by Anncredible at 5:05 PM