My First Husband (Part 3)- The Baby

When I first discovered that I was pregnant, I was devastated.  But once I accepted that I was going to have a baby, I got excited.  I called my sister, Lisa, to tell her the news.  She lived in Baltimore, and had just called in January, not but a couple weeks prior, to tell me that she was pregnant with her first child.  She was due at the end of September, I was due a month later (Halloween no less).  When I told her the news, she got angry with me.  She told me that I was stealing her thunder, and that I did it on purpose.  Eventually, she came around, and we were excited about the thought of having cousins close in age. 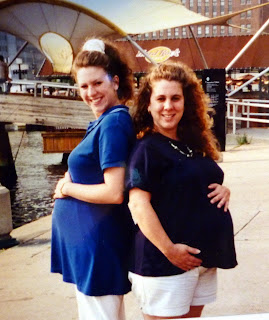 When I was about three or four months pregnant, only six months after my mother's death, my mother came to me in a dream.  This was the most vivid dream I have ever had.  She was standing over my bed, leaning down to talk to me.  I asked her what Lisa was going to have, and she said "A boy".  Then I asked her what I was going to have, and she said, "I can't tell you yet".  I called Lisa the next day to tell her, and she said that she was, in fact, having a boy.

Then, as my pregnancy went on, I started having nightmares.  I would dream that the baby was born premature, that he was born with white skin that was peeling off, and that he was too small to live; Horrible dreams that left me sick to my stomach.  I dreamed several times that he died.  Each following morning I woke up terrified.

Two weeks after the trip to Bristol for the baby shower, I had my regular 34 week check up.  I had a bad feeling about this appointment, and I begged Josh several times to go with me.  He refused, because he had plans later that evening to go to a WWF wrestling match.  So I went alone.

The doctor did his normal tests, and when he pulled out the doppler to check the baby's heartbeat, he couldn't find anything.  He moved the doppler all over my belly, and tried for several minutes.  He assured me that everything was okay, and asked that I step over into the ultrasound room and we would take a better look at the baby.

As he started the ultrasound, I saw my baby boy.  At 34 weeks, I could see all his details, the shape of his nose, his fingers, everything.  The doctor focused on his heart.  It wasn't beating.  Not having a clue, I stared at the monitor.  Wait, there was something.  A flutter inside his heart.  The doctor assured me again, "It's okay.  We're just going to take you over to the hospital and get a better look on their ultrasound machine." The doctor himself drove me to the the hospital.  He weaved in and out of traffic, speeding through yellow lights.

When we arrived at the hospital, I laid on the table for another ultrasound.  Several doctors were in the room at this point.  As the doctor again focused on my baby's heart, there was nothing.  No flutter.  No activity.  And he said, "Yeah, I don't see anything", and looked at me.  I don't know if I was in shock, or just didn't understand, but I didn't get it.  It did not occur to me that my baby's life ended in those last moments at the doctor's office or in the car on the way over to the hospital.  I just sat there and said, "Now what?"  He said, "Is there anyone you'd like to call?"

I couldn't get a hold of Josh, so I called my father.  It wasn't till I saw my dad's face, as he walked through the doorway, that it all hit me.  It was like getting hit by a truck.  The rush of emotions was so overwhelming, I broke down and cried on my father's shoulder for the second time in a year.

The doctor told me that they would be setting me up in a hospital room, and I had to deliver the baby the next day.  We spent the evening trying to track down Josh to tell him.  By 10pm, someone had called the venue for the wrestling match, and Josh was called down to the ring to tell him to head to the hospital.  He told me later that he was all excited, because he thought he was getting called down to wrestle. 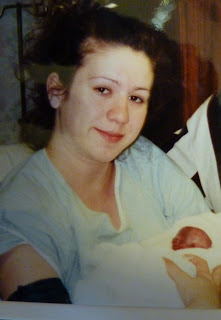 He arrived by 11pm, and I told him what happened.  We cried all night.  He called his family, and they drove through the night to get there.  The doctor induced labor the following morning.  I found out later that my sister was in labor, in Baltimore, at the same time that I was.  Her son was born the very day that I lost mine.

After seven hours of labor, my baby boy was born breech and breathless.  He was three pounds.

I held my son, Tyler, for a while, rocking him while I sang lullabies. The hospital dressed him in his first outfit and took their professional pictures.  They gave me a hand painted box to put all his baby things in, like his blanket, the hospital bracelet, and a card with his footprint.  Then they sent me home.

I cannot tell you the feeling of going home, to a house prepared for a baby, with empty belly and empty arms.  It's surreal. 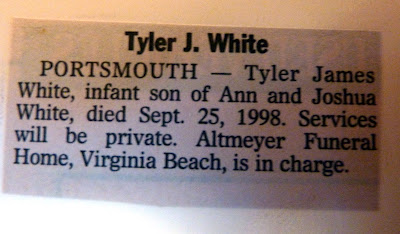 Posted by Anncredible at 3:57 PM