"Toe" Up from the Flo Up

So, this weekend I broke out the Sketcher Shape Ups again to do some vigorous walking. I usually walk in crocs, because they are so comfortable, but I wanted to tone my butt like the Sketcher commercials imply.  Well, I don't know if you've worn these, or even tried them on, but they rock you from heel to toe as you walk.  In fact, it's hard to even stop in them.  Your body just wants to continue forward motion. I rarely wear them due to the fact that they change my equilibrium and I get motion sick (Yes, I do realize that's ridiculous).

So, I walked a couple miles and felt great, until I took my shoes off.  When I took them off, I realized I had sprained one of my toes.  It was my second toe on my left foot.  It's all swollen and red.  Really?  Walking heel to toe made me sprain my toe? What is it with my toes??? 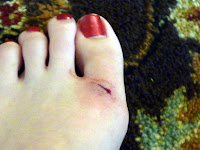 A couple months ago, I almost took my big toe off with a stainless steel pot full of green beans.  As I opened the refrigerator, I SWEAR the whole pan just jumped off the shelf, determined to sever the big one from the rest of my foot. Luckily, with my cat-like reflexes, I just stood there staring and let it hit my foot.

Earlier this year, as I was innocently walking through my apartment, a Walmart bag emerged from out of nowhere.  I took a header after tripping on the empty bag, landing face forward, spread eagle onto the floor.  When I stood up, I realized that I had broken my big toe.  Six hours in the Emergency Room later, I had the evidence to prove that I am capable of breaking my toe on a plastic bag. Fantastic. I am full of grace, and apparently have brittle toe bones. 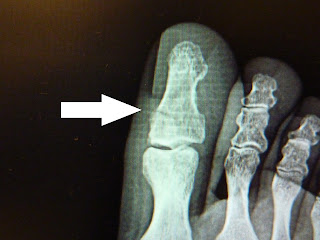 The worst instance was when I was a Junior in High School.  I was a dancer in the school play, The King and I.  I was determined to be the best of my "B" group of girls that wanted to be in the play, but had no talent.  I practiced for what seemed like months.  I knew every move. I couldn't wait for opening night.

As the morning of opening night came, I was watching TV, and the winter Olympics had begun.  I was fascinated by the gymnastics competitions, as I have always wanted to do gymnastics myself.  I eagerly watched each move, and did each trick in my mind.  After watching a few floor mat routines, I was convinced that I too could be a gymnast. And with all that dancing I'd been doing, I figured I would have plenty of balance and strength.

So, I began my own floor routine in my parents family room.  I was a vision to behold.  Why was no one around to see my awesomeness?  Then, as I lifted my body up into the perfect handstand, one of my arms gave way, and I came crashing down into the arm of the sofa.  My big toe breaking my fall. 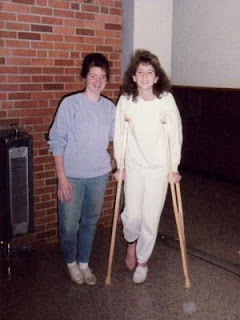 Immediately, I knew my toe was broken.  My bone was even sticking out.  I called for my parents, "Mom?? Dad??".  My father called downstairs, "Quiet, we're talking".  I called again, "I think you should come down here...".  And I heard the footsteps down the stairs.

When my father entered the room, I tried to explain what happened.  He grabbed my toe and wiggled, "Are you SURE it's broken?".  "Dad!  My bone is sticking out!"  And off we went to the ER.  They gave me a set of crutches, and said my toe would have to be reset, and a cast put on by orthopedic surgeon, the following day.

I missed opening night.  There was a hole on the stage without me.  The entire play was ruined because of my absence. And I was stuck on crutches, and in a cast, for the next eight weeks.
Posted by Anncredible at 7:55 PM