Over the course of my life, when people are getting to know me, they ask one question in particular.  It comes after all the pleasantries, and it's usually said during the second or third time getting together; you know, when it's comfortable enough to ask this.  "Ann, did you ever break your nose?"

I have looked in the mirror since I was a kid, and I guess I have never noticed it.  My nose is crooked.  It's not grossly out of alignment, but it is off enough to make one ask if I've ever taken a mallet to it.  Nice. 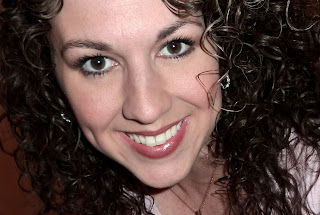 For many years, I said "No, I've never broken my nose".  I couldn't think back to a time when I went to the doctor or hospital for a broken nose.  So, I always assumed I never broke it.  Sure, there were times that I hit my nose with my knee, like when I was jumping on the bed or wrestling with my sister. But nope, I didn't recall breaking it.

Then, in 2001, I was having some problems with my tonsils, so I went to an Ear, Nose and Throat specialist. The first thing she asked was, Have you ever broken your nose?  I said, "No, not that I recall".  And as she continued looking at my nose, then, subsequently began jamming a wire, with an attached camera, into my sinus cavity, she looked perplexed.  (Side note:  I HATE things being stuck up my nose.  So don't ever do that.)

The doctor stopped, looked me in the eyes, and said, "Your nose has been broken".  WHAT?!  How could I not know or remember?  I started to think back over my childhood. And, I could remember getting hurt a million times, because I was a Tom Boy, but not breaking my no.......  Oh.....

It finally hit me.  There was this ONE time (not at band camp. that's another story), when I was about seven or eight years old, that may have been the one that did it.  The little incident that caused me a lifetime of questions.  Did that sound dramatic enough?

When I was about seven or eight, my dad had a weight bench.  I don't know if he was trying to work out, or if my mother just saw it at a yard sale and thought it was a good deal.  Regardless, this simple red weight bench sat at the bottom of the steps leading down to our family room.  Most of the time, I left it alone, because I had mud pies to make or birds to sing to in the back yard.  But the day came that my curiosity got the better of me. 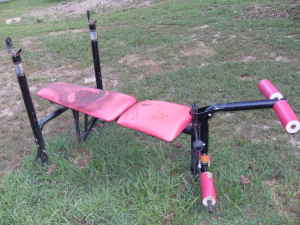 At one point in time, I had seen my dad laying on his back, lifting weights above his head.  I could do that too.  My parents were at least smart enough not to leave the bar and weights on the weight bench, it laid on the floor in front.  And I was not strong enough to lift the bar, with weights attached, to put in the cradles of the weight bench.  But I was determined to lift SOME kind of weights.

I looked around and found two five pound dumbbells.  That would work.  They were heavy to me, but I was strong, and I was going to show them whose boss.  Don't ask me where my parents were at this point, because I haven't a clue.  But I laid down on the weight bench, my head between the bars, and I lifted the dumbbells from my chest to the ceiling and down again.  I was doing it!  I was strong!  I was only able to do it once!

Just as I had seen my father put the bar into the cradles when he was finished, I too put my dumbbells in the cradles.  As you can imagine, they aren't meant to go there or be balanced in that way.   And as I let go, one fell straight down on my nose. THUMP! I screamed and cried, and my parents came running.  I wasn't able to explain what had happened, because I was blubbering so badly, but they assumed it was one of my normal kid injuries and did not take me to the doctor.

I eventually got better, and I moved on with my kid life, not realizing that the course of my future had changed in that one single moment.  That instance ruined my modeling career (okay, not quite positive about that), and it caused me to lose my sense of smell. (For those that don't know me, I can't smell very well.  I rarely smell anything, and if I do, I have to try really hard.  To me, oatmeal cookies and cigarette smoke smell the same.)

But that's it.  I DID break my nose.  Now we can all breathe, well most of us can.  Thank you for asking.
Posted by Anncredible at 9:40 AM