During the summer of 1997, a couple months before my mother died, I was working for Delta Faucet Company as a Commercial sales rep.  I spent my evenings hanging out with a rowdy group of friends.  I don't even remember how I met them, but we were together most nights.  And the more we were together, the better I got to know each of them. 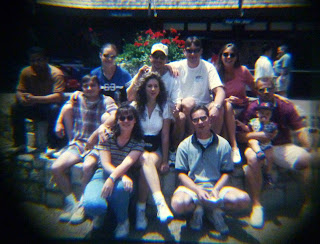 I was drawn to the younger brother of my friend, Bill, because I'm a cougar you know.  His name was Josh, and he was only a couple years younger.  He always had a smile on his face, and he always had a hilarious story to tell.  He wasn't really anyone I would consider marrying, because he was a pot head and didn't really have any ambition, but we had fun hanging around together.  This is what we call a "Summer Fling".

Then my mother died in October, and I leaned on Josh for support and comfort.  My father moved back into my mother's house, leaving his house vacant.  And my father asked if I would rent that house from him, so I agreed.   Josh also moved to the rental house.

By Christmas, only two months after my mother's death, Josh asked me to marry him, and I said yes. I was 25yrs old and I really didn't have anything else positive going on with my life at the time.  I was coasting, thinking  I was living, trapped in a haze of grief over my mother.

During this time, Josh was becoming more and more protective.  He led me to believe that my friends were not good enough, that they were bringing me down.  When we went out, he thought that I was "making eyes" at other men.  We couldn't hang out with our group of friends, or even just his friends, without him accusing me of sneaking looks behind his back.  Systematically, I stopped contacting my friends.  I quit my pool league that I loved.  I rarely left the house, except for work.

In January, only a couple weeks after accepting his proposal, I decided that I was wrong and wanted him to leave.  When I told him that I wanted to end things, he convinced me that he would be different, so we stayed together.  We tried, all the while, removing ourselves from everyone we knew.  I was sinking into a hole.

February 6th, I found out I was pregnant.  It was devastating news to me.  I didn't want the baby.  I cried many, many times.  What had I gotten myself into?  I wasn't married.  I had a great career.  Josh was a controlling pothead.  That's not the type of man I wanted to be the father of my children.

I immediately started calling abortion clinics.  They don't even see you until you are six weeks pregnant.  Six weeks??  The baby has a heartbeat by then. I couldn't do it.  Morally, I was unable to make a decision like that.  It was up to God.  If he wanted me to have a baby, so be it.  I opened up the phone book and picked a doctor.

When I was 18 weeks pregnant, Josh and I went to the ultrasound, and found out it was a boy.  He looked healthy.  And as we left the hospital, Josh said that we should stop by City Hall and get married.  Get married?!  Today?  At least I was wearing a dress.  So what if I wore that dress to his grandmother's funeral, I could get married in it, right?

We were married within the hour.  No family.  No friends.  No pictures.  We just stood in front of some guy's desk, while he officiated. Then we drove to my dad's house to tell him.  He gave us money to buy dinner.
Posted by Anncredible at 11:46 AM