Is your fear immobilizing or motivating?  I remember when I was about eleven years old, and I was with one of my friends, wandering in the woods.  We came upon a large, open field surrounded by woods on all sides.  As we ran across the field, we started to sense that someone or something was watching us from the far edge of woods in front of us.

Our run immediately slowed, then became a walk, then we just stood still, listening and looking around, trying to figure out what was out there.   And I remember my friend yelling, "I think there's a wolf!", and she turned and ran full speed in the direction we came.  My heart began to race.  I couldn't move.  I couldn't yell.  Fear and dread washed over me.  I was terrified that "something" was after me, and there was nothing I could do about it.  It turns out that it was nothing at all, but I remember that fear so clearly.  It was the most scared I had ever been, until I had my son Eliah.

At the age of five months, Eliah was in the hospital for two massive brain bleeds, non-stop seizures, surgery to put in a port, and to take years off my life.  About two weeks into our stay at the hospital, I was alone with Eliah one night in our hospital room.  We had just been moved from intensive care into a regular room at the end of a long hall in the children's hospital.  It was around 10pm, and a nurse was helping me get set up in the room, and she sat to talk for a while.  I was just holding and rocking Eliah, while the nurse and I got to know each other.


Eliah started to fuss and cry, still in pain from his recent surgery. He would often scream out, and I was usually able to calm him.  This time, however, he screamed out and did not take another breath.  I looked down at his little baby face and saw his lips begin to turn blue.  The nurse jumped up and hit the CODE button on the wall, alerting all staff to get down there.  Lights flashed down the halls, and a high pitched beeping sound began to echo through the wing.


By the time she placed his limp body on the bed, put the bag over his face, and began forcing oxygen into his lungs, Eliah's body was almost completely blue.  Then she looked up at me and said, "Go get help!"  My heart was in my throat.  That same dread as the field took hold.  My legs moved me out into the hall, but I could barely get myself more than a couple doors away.  I tried to call out, but all I had was a lump in my throat.  I tried again and again, and I must have made some sound, as a few other mothers appeared from their children's rooms to see what was going on.  I just kept trying to say, "Somebody help my son..."

Eventually, the staff responded to the Code call, and about twenty doctors and nurses filled the room.  They got Eliah breathing again.  They saved his life.  He was sent back to intensive care, and subsequently stopped breathing another fifty or more times over the course of the next few days.   And has done so many times in the couple years following, even this past July.

At the time, that fear was so crippling to me.  And there is no doubt that it was warranted.  But that type of fear is what motivates me now on a daily basis.  Maybe it's about perspective.  Maybe I don't sweat the small stuff that other people do, because in comparison, it's not worth it.

Recently though, there has been a shift.  Maybe I'm growing up.  HA!  (That is an absurd thought to me)  But I'm done being paralyzed by fear.  I'm done worrying about not being good enough.  There will always be a million people that think they know what's best for me, or how to live my life better.  There are always going to be people that don't like me, because of this reason or that.

And then, there will always be the people that see I'm special, beautiful, smart and funny; the people that support and love me through good times and bad.  When I'm surrounded by those people, what reason is there to be afraid??


I am done being afraid.  This is who I am.  I am Anncredible. 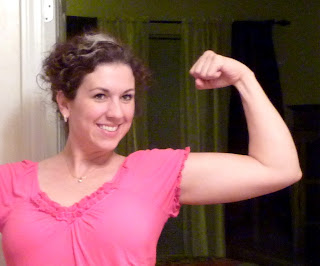