In the past, I looked at Laser Hair Removal as a fantastic invention for the rich, and something I really, REALLY wanted.  My mother was of English descent, my father of Spanish, so I was lucky enough to receive pasty white skin and dark, coarse hair.  From a distance, I look like I have a tan.  Get any closer, and I look like Sasquatch.  The thought of removing unwanted hair in a pain-free, permanent way, was gold to me.

As I hit puberty, it was apparent that I would have to take care of certain body hair.  I shaved my legs and  armpits like other girls.  But I couldn't walk around with a mustache.  Girls just don't do that.  Shaving was not an option, as a 5 o'clock shadow is not lady-like.  So I bleached it.  I bleached ALL the hair on my face (with exception of eyebrows).   And I also bleached the hair on my arms.

Years passed and I was used to my routine, but I still longed for the magic hair removal fix.  Then came middle age.  In case you guys that are reading don't know, as women age, they have hormonal shifts.  Those hormonal shifts are reflected by the growth of chin whiskers.  Sure, you can pluck for a while, but they grow back. They multiply.  They grow at light speed, even while you are in mid conversation with an attractive person of the opposite sex.

Finally, after years of embarrassing wolf-man features (yes, I am exaggerating here), I opted for laser hair removal.  My soon-to-be ex-husband and I, with children in tow, all sat in a small office with a laser professional and went over all our options.  Doing my face was a no brainer.  But did I want more??  Hell yes I did.

I chose to do my face and.... a Brazilian.  If you don't know what that is, let me explain.  It's the removal of hair from the front of the crotch to the back of the butt.  I THOUGHT it was an awesome idea at the time.  The 22yr old laser "technician" explained that it's easy and painless.  In just six short sessions I will be hair-free.  They guarantee it for two whole years.  No more shaving.  No waxing.  Forever! Woohoo!  Bring it on!

My first session was two weeks later.  I arrived early, freshly shaven on my face and "elsewhere", in excited anticipation of finally being a woman instead of a gorilla.  They called my name and I sprung up from my seat in the waiting room.  The technician led the way to the small room with just a paper covered table and the laser machine in the corner.  I was instructed to remove my clothes and lay on the table with a paper blanket over myself.

After a couple minutes, the very young (probably 24yr old) technician came in.  She was quiet and didn't say much.  She pulled out a camera, took a picture of my chin, then lifted up my paper blanket and snapped a couple more pictures.  After having three child births, with a million people viewing, there's no more shame left in me to be uncomfortable now.

The tech spread ultrasound gel all over my face and began with the laser treatment.  It is sudden, and feels like being snapped with a rubber band.  She did the first one, snap, "Is that okay?".  I say, "Sure, that's nothing." So, she continued on, moving the laser in a typewriter fashion.  When she was finished with my face, she held two ice packs against my cheeks.  It burned and froze all at the same time.

Did you know that the laser actually burns the hair follicle?  I learned that pretty fast when she moved South.

The tech didn't really say much at all.  I don't know if she just didn't like to talk, or if she was uncomfortable about sticking her face in some one else's crotch.  Maybe both.  She smeared the ultrasound gel on, and pressed the laser on the side of my bikini area.  "SNAP!"  HOLY CRAP!  Now that was different.  This area of my body does not see the sun, so it's a BIT more sensitive.

She continued on, head down, no words spoken.  Every snap of the laser I jumped.  I screamed.  There were many moments that there was air between my entire body and the table.  Why would anyone choose to do this?!  This is NOT painless!  When she was finished, my skin was burning.  You're not supposed to burn down there unless you have some sort of, you know, problem.  But I was sure happy to see those 14 ice packs.  I could have easily walked around with ice packs in my underwear all day. 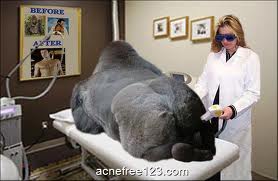 Once I started breathing again, she set up my next appointment.  Again?!  You mean I have to do this again?!

The next month I got a very talkative technician.  She was fun and made me laugh.  It made the process so much easier.  She made me forget about the pain, and just talked.  That was not necessarily a good thing.  Point of note, when someone has your cheeks spread, and their face and a laser on your butt, don't laugh.  If you have gas, it's mortifying.  If you don't, you're sitting there puckered up.  Either way, it's really bad.

Ultimately, after a year and a couple months of going to the sadist laser torture chamber, I gave up.  It worked some.  Picture a soccer ball.  Was it worth the money?  No, definitely not.
Posted by Anncredible at 9:58 PM