I met with the Radiation Oncologist today to discuss whether or not radiation will be the best option for me.  In preparation, I spent hours researching and reading as much as I could to present arguments against radiation.  My hope was that the doctor would be able to quash each argument and explain why radiation was necessary.  I needed to know that it was necessary and why.

First, let me say that I have complete respect for this doctor.  She is intelligent, kind, and understanding.  She knows what radiation does to the body.  She knows the short and long term effects.  She knows the benefits of it's use in cases of cancer.  I absolutely respect her opinion.

As she dutifully pointed out, EVERYONE that comes in there is "cancer free", by chemotherapy and surgery.  So my coming in there with the attitude that the cancer is gone, so I shouldn't need radiation is complete crap in her mind.  Makes sense...even though "complete pathologic response" is not addressed here.

My next argument was, "Now that I'm cancer free, shouldn't I be working on building my immune system, strength, body chemistry, etc to fight off cancer? Won't radiation break down what's healthy and further expose my body to the risk of recurrence?"  But as she explained, they have studies and science-based evidence to prove that radiation prevents recurrence of cancer.

Based on the information that is out there for doctors to use, plus her own experience with my type of cancer and it's staging, she recommends radiation......not strongly though.  She explained that the information doctors have in regard to radiation is outdated, especially when it comes to breast cancer.  Now that there are targeted therapies, like the ones I'm on, and new chemotherapy that offers complete pathologic response, like the ones I took, they don't know if radiation is necessary.  There are no new studies to refer, no previous experience to relate to my particular situation.

The choice to do radiation is completely optional, not necessary.  She even explained that if I were a little older, they wouldn't even recommend radiation for my case.  They just want to take every single precaution to prevent recurrence, and so do I, but how we get there may be different.  I want to include natural ways to create a healthy body, and doctors don't incorporate that or use that in factoring survival rates/outcomes.

The doctor does want to get new information in the works for other doctors to utilize going forward.  She asked if I wanted to be a part of a study of women in my situation.  I qualify with the type of cancer, treatment, and outcome.  In this trial that starts in the next two weeks, half the women will receive radiation, the other half will not.  I won't know which side I would be chosen for until after I signed up.  Their health will be followed for the next ten years to determine if radiation was necessary.  That would leave the decision to someone else on whether or not I receive radiation.

Over the course of the past couple hours, I've struggled, thought, prayed, and then decided to just get practical.  Maybe this decision can be made with one simple question, "Can my body take the radiation?"  It's been proven that large amounts of radiation can cause cancer.  We know that the amount used for breast cancer is considered safe.  But what about the cumulative effects of years and years of exposure?  Just with my son, Eliah, I was exposed to more than 17 CT scans in the past few years.  That doesn't include all the tests that I've done in the past year.

I decided to do the actual math.  With the help of the American Nuclear Society, the National Institute of Health, and a website called Xrayrisk.com, that calculates your radiation exposure based on the medical tests performed, I was able to come up with my radiation exposure for the past few years.

The following chart does not include exposure before few years ago, nor does it include environmental exposures.  This total is medical tests alone.  And these are only MY tests. 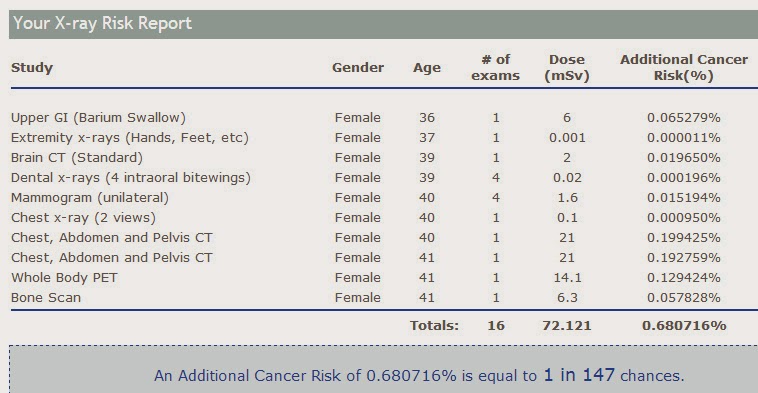 What do these numbers mean, you ask? I will tell you. Based on the following chart, which I realize is a guide only, the EPA says the average person safely absorbs about 3.65 mSvs (or 0.00365 sieverts) of radiation annually. The above calculated amount is far above that. But the issue is not the immediate consequence. The issue is the long term exposure and the cancer risk. And we already know that I will have CT scans and PET scans in the future. The bottom line is, it's just too much. MUCH too much for me to be comfortable doing something "optional".


Now I realize that was a lot of numbers, new information, and assumptions I made regarding radiation exposure. I hadn't even considered this risk before now.  No doctor has asked what I've been exposed to before.  Nobody tracks that information.  We know radiation causes cancer, but who makes sure you don't get too much?  Right now, I have to do that for myself.

One thing the doctor said that stuck with me, "Whatever decision you make, do it with no regrets.  Don't look back and wonder."  And I didn't feel comfortable making this decision on just a gut feeling.  I needed information to make the decision.  Unfortunately, the only facts that were offered by the doctor were outdated and not ideally related to my situation, so I was on my own.

I feel that, based on the above information, and what I have learned over the past six months, I have made an educated decision that I am comfortable with.  I have thoroughly weighed all options.  I will forego radiation.  I will have a week to mull over my decision before I call the doctor and tell her.  But I feel I am making the right decision for me and my personal case.  And going forward, I will do everything in my power to make my body healthy and create an environment that naturally eradicates any future cancer.