Moving on With Life

People always talk about living an authentic life.  What does that even mean?!  Life can be hard.  I feel lucky that I've had success, but it's difficult to navigate in changing times.

I had to make major changes to my life recently.  I felt stuck, unhappy, and like I was drowning in a mess that I chose and created for myself.  It started with my job.  I LOVED what I did for a living, and I was very successful at it.  I was the Director for a functional medicine clinic that reversed Type II Diabetes for the past year and a half.  In that time, I brought in over $2.5 million dollars.  Unfortunately, my pay structure changed several times, and by the beginning of May, I wasn't even going to make enough money to pay my bills. So I reached out to another local clinic.

Turns out, I found the most brilliant medical doctor, who specializes in Natural medicine, hormone balancing, and stem cells (to name a few things).  They saw my value and hired me immediately to run their practice.  It was a match made in heaven!  Not only have I helped them get organized, hired the best team, and helped make some good money, but this doctor teaches everything I have spent years researching and believing, and I get to benefit and learn from the best. One of the benefits is getting my hormones in balance.


I've struggled for YEARS with too much Estrogen.  That's one of the things that put me at high risk for breast cancer. No doctors really test to see how out of balance the reproductive hormones get, so I tested a couple weeks ago.  Just to give you an idea of what Estrogen dominance looks like, here are my numbers.

What this means is, if I were to keep it as is, I'm at high risk for getting cancer again.  So, Dr. Connie was able to do natural hormone replacement.  Meaning, I got some Testosterone pellets placed in my hip and they time release over three months.  Then I take a progesterone supplement at night before bed.  WHAT A DIFFERENCE!!

I feel like a new person.  I have energy, stamina, and I even had a kissing dream the other night.  I feel like a teenager. Hahaha!

The clinic I work for also does the best stem cell treatments.  Stem cells can become more than 200 different cells in the body.  They can turn genes on and off.  They can heal brain damage, stop seizures, and repair the brain and body.  See where I might be going with this?  MY SON

Now, onto the other changes in my life.  I recently broke up with my boyfriend of five years...several times actually.  I never wanted a long distance relationship, but I did my best to make it work. The most embarrassing part, that I shouldn't admit publicly, but does show that I'm being completely honest about my life, is that he proposed to me in November of last year, but then rescinded two days later.  I felt like I wasn't enough to want forever. Wasn't GOOD enough.  I still tried to make it work, with all those feelings lingering.  And then I started to feel like I was sinking and drowning into feelings of NEVER being enough.

And then I realized, I'd rather stop trying to give someone every bit of my love, even taking from self love, and start focusing on investing my time and energy in to the things that make me happy.  I like to think of it like the movie Groundhog's Day.  Stop trying too hard for the things that will never work, day after day.  Start focusing on learning, growing, and becoming who I'm meant to be.  When I do that, things will fall into place....hopefully.  Regardless, saying goodbye, whether short term or for the last time is difficult.  I've grieved the loss of this relationship since November.

That brings me to the latest "authentic living" event .  I really hate that term.  Anyway, I FINALLY got my breast reconstruction tattoo.  It's been five years since my reconstruction surgery, and I've been walking around with this great (naked) breast.  I chose not to get a reconstructed nipple or the 3D tattoo of a nipple.  Those seem fake (I know, it's all irony here) to put a make believe nipple on a reconstructed breast, but I wanted something that expressed my personality.

I needed to feel pretty and less like Frankenstein. I feel like I'm put together like Sally from Nightmare before Christmas.  And with potential dating on the horizon, and this exhausting search people have for the perfect body, proportions, and the endless paradox of choice of "is this one better than the last" mentality, I'm extremely self-conscious and self aware of the challenges I face.

My best, and most tolerant, friend Brenda came with me for this momentous event.  I found a place in Asheville that would do the tattoo.  I had to call several places, because not everyone is willing to tattoo a breast.  One man actually said, "Um, ew" when I explained what I wanted done.  But I found the perfect spot, and she was so open and willing to come up with a design I liked.  I went in with no expectations, just some ideas. 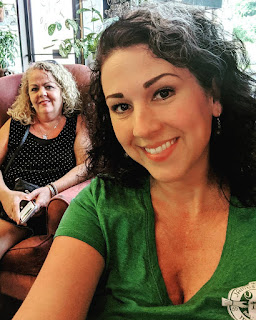 And an hour later, this was happening....  Thank GOD that breast was completely numb.  I only felt 10 seconds of pain when she went near a scar edge. 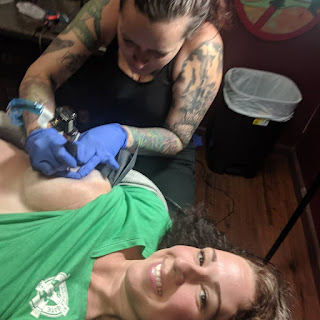 And three hours later, it was finally done. 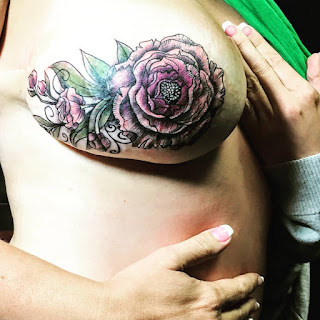 When I sat up and saw myself in the mirror, I was not only happy to see such a beautiful tattoo, but I was also overwhelmed.  We got to the car and I cried.  I felt completely emotionally drained.

This was such a big deal for me.  It changed who I am and what I look like forever.  I'm proud and scared and insecure.  I see myself differently and I felt every bit of weight that carried.  Even today, I get queasy wondering if this will be a deal breaker for someone in the future.  Yeah, yeah, I know.  If it's a deal breaker, you don't want them anyway.  But there's always that insecurity of  "will I be enough?"

It's going to take time to rebuild who I am, my self esteem, and my life.  I feel like I have to do it over and over again until I get it right.  Will I ever get it right?  Who knows.  I do feel like I'm going in the right direction.  It took almost 47 years to figure out what I want to do for a living.  And I love every second of it.  It may take another 20 years to find the love of my life.  I'll wait forever if I have to.

In the meantime, I'll just be over here living authentically (vomit).
Posted by Anncredible at 9:23 AM