You Know How I Love to DIY

With my son Eliah growing, and recent discussions of how to affordably bathe a special needs child, I decided to take matters into my own hands and build a bath. You know my motto, "If someone else can do it, so can I".   I mainly did it for two reasons.... One, to make it easier to bathe Eliah.  And two, I wanted to prove it doesn't take a fortune to make this possible. 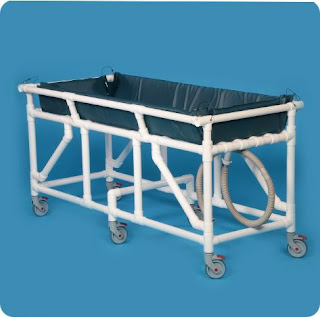 But when you look at it, it's just PVC.  And if you know me, you know I love to work with PVC to make projects for Eliah. It seemed doable.  Besides, there's no way I could or would pay $1700 for one.

The main thing I needed to remember was, I don't have an 8ft long shower to roll this in, so I needed to make it a manageable size.   Eliah is tall, but there are ways to make it workable for him.  Eventually, when he is an adult size, I will probably make something that he sits more upright.  There's really no need for him to lay completely flat. There's never going to be room for a full-sized gurney in my house.

Anyway, I started with 1 1/2" PVC and made a frame.... And remember, I've never done this before, so don't be too judgmental.  I gave up on making an exact replica of the above bath, and I just made it up as I went along.  It's very sturdy, and it's held together with PVC Cement and screws. 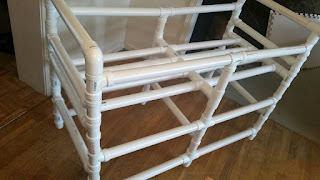 Then I added two layers of foam rubber flooring, so that it will be padded for Eliah. 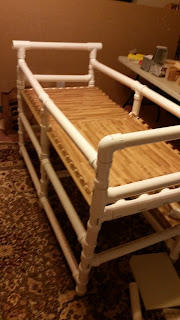 Then I added flexible plastic around the edge of the tub area, so that the sides will be firm for the liner and hold in water.  Even Natalie got in on the build! 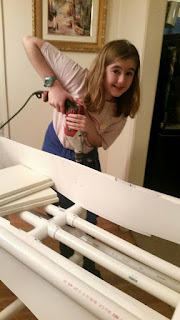 Next, I added locking casters to the legs. 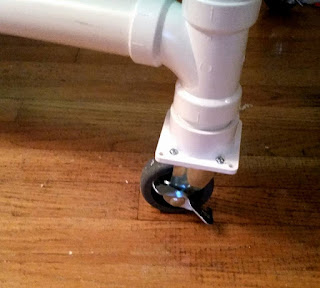 Then, I debated on how to make a water liner.  I originally bought a pond liner for $49, but then after thinking outside the box, I decided to use a commercial grade shower curtain.  It's thick, easy to clean, and easily replaceable if it gets dirty or worn out.  It also has grommets on one end, so I used those to keep the liner in place.  I just used screws on the pvc to act as hooks for the grommets.  When done with the bath, I unhook the grommets, drop the shower curtain down, and drain the tub.

I considered adding a real drain, but makes it much more difficult to replace the curtain.  It's a possibility for the future, but I really like to make things easy and changeable. 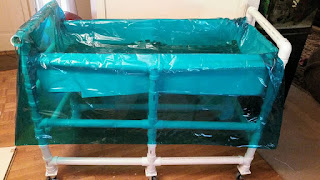 That was it!  The bath was done.   In total, it was $265.  And if had known what I was doing to start with, I could have done it for less because I wasted some PVC with mistakes.  Total time to build was about 6-8 hours.  Not bad for saving so much money.

I appreciate that I chose to buy an accessible house with roll in shower.  And the bath fit right into the 5ft shower.  But, in saying that, if I only had a bathtub, I would have designed and built something to work with that as well.  Anyway, the bath measures 54", so I lucked out. 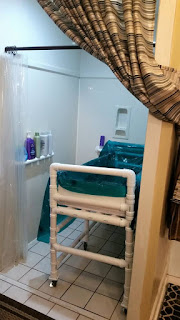 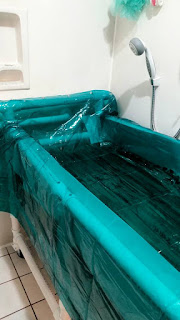 Next step was trying Eliah in the bath....


It was the perfect height to bathe him, no bending over.  And my clothes didn't get soaked.


After he was done with his bath, I let the water out.  I kind of forget that the shower is only slightly sloped, so it did go all over the bathroom.  But in the future, I will remember to let it out slowly.

It didn't take long to get the water out, and then I buried him in towels. 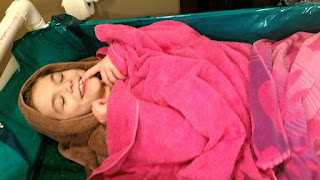 I was able to dress him in the now dry bath, and then back in the lift to head to the living room.  It was great for all of us!

Overall, I'm really happy with the result and proud that I wasn't intimidated with this project.


Edited to add:  I decided to put in a drain since it's hard to control the flow with just the shower curtain.  I bought a sink drain with plug and used a piece of stiff plastic to support it under the liner.  It just goes in between the PVC rails.  I used a washing machine hose to attach to the bottom of the drain to divert the water on the floor of the shower.  Works perfectly! 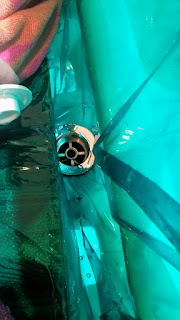 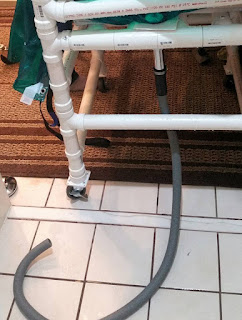 I also added a padded headrest for Eliah to keep his head above the water level.  It's a combination of foam on top and rubber flooring underneath.  It's curved to fit around his neck.

The bath has been working great, and I'm so happy this was an option!
Posted by Anncredible at 9:29 AM